As followers of Christ, we are continually on a journey to deepen our faith and grow in love, service and knowledge of God. This can be challenging amidst families, work, and busy schedules, as well as competing ideas we are confronted with daily. We continue to grow in our faith and learn together as part of a worshiping community. Parishioners of Divine Mercy Parish are invited to attend the many adult faith formation programs offered throughout the year.

The Neocatechumenal Way is a charism within the Catholic Church dedicated to Christian formation. It was formed in Madrid in 1964 by Kiko Argüello and Carmen Hernández. Since its founding in Spain, under the pontificate of St. Paul VI in the 1960s, every Pope has encouraged “The Way,” seeing the great fruit that it bears. Pope Francis, on their 50th Anniversary, stated, “Your charism is a great gift of God for the Church of our time. Let us thank the Lord for these 50 years.”

Catechism of the Catholic Church no 1231 expresses the teaching of Great St John Paul II on the catechumenate. (also see here)

1231 By its very nature infant Baptism requires a post-baptismal catechumenate. Not only is there a need for instruction after Baptism, but also for the necessary flowering of baptismal grace in personal growth.

Taking its inspiration from the catechumenate of the early Church, where converts from paganism were prepared for baptism, The Neocatechumenal Way provides this post-baptismal formation to adults who are already members of the Church. It is also for those who are far from the Church and who have been attracted by seeing signs of faith (i.e. love and unity) in the communities. Lastly, it is also for the unbaptized who can use it as a true catechumenate to be prepared for baptism.

Matthew 7:20 says, “you will know them by their fruits.” Many fruits have come forth from the Neocatechumenal Way. For example, many marriages have been rebuilt, many children have been born, and many vocations have been answered —to the priesthood (like Fr. Zeljko and Fr. Pablo), consecrated life, missionary work (either as a single person or family) and to married life.

THE NEOCATECHUMENAL WAY IN THE PARISH:

In September 2018 the whole town was invited (with a mission in the street and articles in the Advocate) to a catechesis which began every Monday and Thursday. After that, the first Neocatechumenal community was formed in the parish in the fall of 2018. Having begun a continual itinerary of Christian formation, they meet to have an encounter with God. Part of their formation is a mass (called a Eucharist which is the original name for the mass) on Saturday evening —lived in a small Christian community. The very intimate environment is a help to experience the richness of the sacrament. The Eucharist is in the Parish Hall at 7:30pm every Saturday. All are welcome!

For those interested, there will be another catechesis this coming year! Please speak with Fr. Zeljko and Fr. Pablo for more information.

Here are some links to speeches of the Popes on the Neocatechumenal Way: 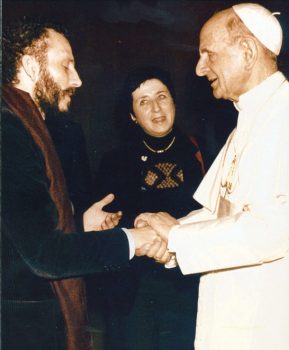 Saint Paul VI with the initiators of the Neocatechumenal Way, Kiko Argüello and Carmen Hernández.

1977 Meeting with the Neocatechumenal Way (you can use google translate which works fairly well): 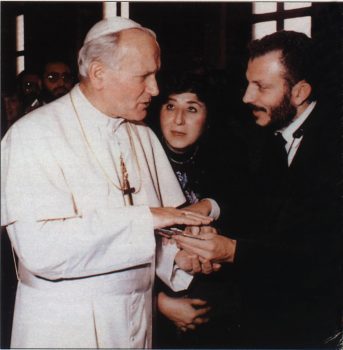 Saint John Paul II with the initiators of the Neocatechumenal Way, Kiko Argüello and Carmen Hernández.

1990 Letter on the Neocatechumenal Way:

1997 Meeting with the Neocatechumenal Way: 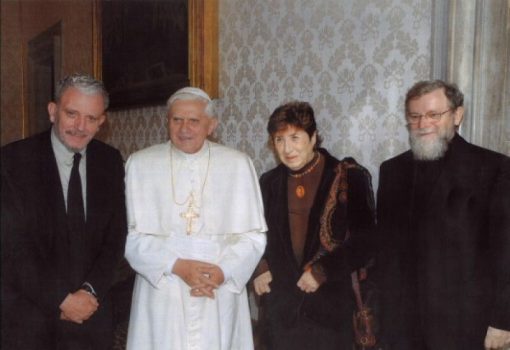 Pope Benedict XVI with the International Team in charge of the Neocatechumenal Way, Kiko Argüello and Carmen Hernández

(who are also it’s Initiators) and Father Mario Pezzi, a priest of the Diocese of Rome.

2012 Meeting with the Neocatechumenal Way:

Pope Francis with one of the two initiators of the Neocatechumenal Way, Kiko Argüello.

2015 Meeting with the Neocatechumenal Way:

2018 Meeting with the Neocatechumenal Way:

THE STATUTES AND THE CATECHETICAL DIRECTORY

In 1997 Pope John Paul II “encouraged [Argüello and Hernández] to examine their thirty-year experience of the Way, and to formalize it with a written statute,” and Joseph Cardinal Ratzinger urged the drafting of the Statutes as “a very important step that will open the way to the formal juridical recognition by the Church, and giving you a further guarantee of the authenticity of your charism”  The Statutes drafted in response were approved ad experimentum for five years in 2002, and on June 13, 2008, after review by five dicasteries and the Pontifical Council for the Laity, Stanislaw Cardinal Rylko published a decree containing the definitive approval of the statutes of the Neocatechumenal Way.

The Statutes describe the nature of the Way and regulate its charism and specific tasks within the Church. Through them the Neocatechumenal Way was endowed with “public juridical personality” status. The Way is thus closely governed by an ecclesiastical authority, performs entrusted functions “in the name of the church,” and has no material goods of its own.

After thorough examination by various Vatican dicasteries, on December 26, 2010, the Pontifical Council for the Laity approved the text of the catecheses which are handed on to neo-catechumens during their itinerary. Pope Benedict XVI praised the approval: “With these ecclesiastical seals, the Lord confirms today and entrusts to you again this precious instrument that is the Way, so that you can, in filial obedience to the Holy See and to the pastors of the Church, contribute, with new impetus and ardor, to the radical and joyful rediscovery of the gift of baptism and to offer your original contribution to the cause of the New Evangelization.”.

Address of his Eminence Card. J. Francis Stafford To The Itinerant Catechists of the Neocatechumenal Way about approval of the statutes.